I’ve struggled with the political climate lately—the inattention to critical issues, the active attempts to destroy civil rights, the systemic misalignment of wealth towards those in power, the appalling lack of empathy. Like many people, I find my focus lacking, my productivity down, and my nervous system overwhelmed. As someone who thrives on information, it’s hard not to be sucked into reading the news, but reading the news only shreds my nerves further. I find it difficult to sleep restfully through the night.

Last night I attended a Phi Beta Kappa dinner and lecture. Renowned historian and UNC-Chapel Hill professor emeritus Dr. William Leuchtenburg was the honoree and speaker for the evening. Dr. Leuchtenburg is a noted presidential scholar and expert on FDR. He’s done election-night political analysis for some of the major newscasters of our time; he’s consulted with Ken Burns on his documentaries; he marched with Dr. Martin Luther King Jr. in Alabama.

Dr. Leuchtenburg gave the address, “The White House and the South.” It was fascinating and depressing all at once, in particular to hear the role race and the one-party system had played. The professor noted that at our country’s founding, Southerners held the White House for something like 32 of the first 36 years, lost control for over 100 years, and now are again winning presidential races more than half the time.

About two-thirds of the way through Dr. Leuchtenburg’s speech, he paused and said, “Excuse me, I’m not feeling well. I think if I can sit down for a few moments I’ll be able to finish.” While he rested, the evening’s host explained that the good professor’s wife was in the hospital ER and he’d been there all day; then on the way to this event, he’d had a flat tire on the interstate. “What amazing resilience,” she added. “How many of us would have made it here after a day like that?”

When he finished his remarkable and humorous lecture, the audience gave the professor a standing ovation. Then he agreed to take some questions. “But I turned 95 last week, so I might stay sitting.”

After a series of political questions and insightful responses, our host wrapped up by asking, “What gives you hope for the country?” 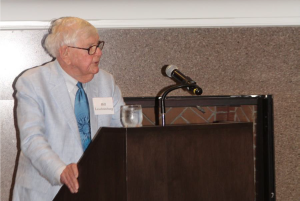 Dr. Leuchtenburg paused and said, “It’s not as much hope as the refusal to despair. I’ve been through the Great Depression, I knew people directly affected by the Holocaust, I lived through McCarthyism and Jim Crow laws, and the Iran Contra hearings and so many other things. And we always come through. We forget: ‘This too shall pass.’”

It’s not as much hope as the refusal to despair.

As he said that, I felt myself regain perspective—not minimizing our current frustrations, but recognizing what he said as true.

His words soothed me. When I got home, I didn’t want to let them go. I didn’t check the news, I didn’t look at email, I didn’t even open my beloved Jane Austen for fear of interrupting the calm that had wrapped me.

And I slept all night.

Got a couple of visitors near the chicken coop. Not sure if transitory or permanent. Hmmm.
The chickens are feasting on their weekend scratch!
We decided to be #frontyardchickens this morning.