bird on a roof sings

One last promenade
atop the coop before
a long solstice night.

Christmas week we lost another chicken, the second in 2015 (we lost Victoria in February). Poor little Anne had been showing some oddities throughout the year but in December she started showing more specific symptoms (lack of appetite, lethargy, etc.), and just before solstice we took her to the vet at NC State. We weren’t willing to do extensive tests and treatment, and the vet said even with them, Anne probably had something serious (e.g., cancer rather something simple like worms).

We decided to euthanize her and have an autopsy done. Preliminary results suggested Marek’s, which is a viral disease chickens are susceptible to. While our chickens were vaccinated for Marek’s, chances are the vaccination wears off at some point (it probably varies by breed). In Anne’s case, the disease resulted in tumors all over her insides that compressed her egg-laying apparatus as well as her GI tract.

We were relieved that the autopsy results showed she had something wrong that we couldn’t have prevented. (We want to be good chickenparents!) And we felt comfortable that we made the right decision about euthanization. As a side benefit, the NC State vet program lets the veterinary students do the autopsies as part of their studies; it made us happy to contribute in that way too.

The photos on this page are not recent. As the chickens have aged, they’ve been less interested in jumping up to the heights. (Leave that for the little chirps!) But shortly before Anne got sick she started flapping up to the top of the coop again. Margaret would follow sometimes, but she is bigger and ungainlier than Anne was, so struggled to get her heft up there. When the chickens jump up to the coop (or chair or bench), we always imagine they are saying, “I like to be tall, Chickenmama! I like to see everything, Chickenpapa!” I guess she wanted one last look before the dark night came.

We miss you, little Annabel! Bye-bye! 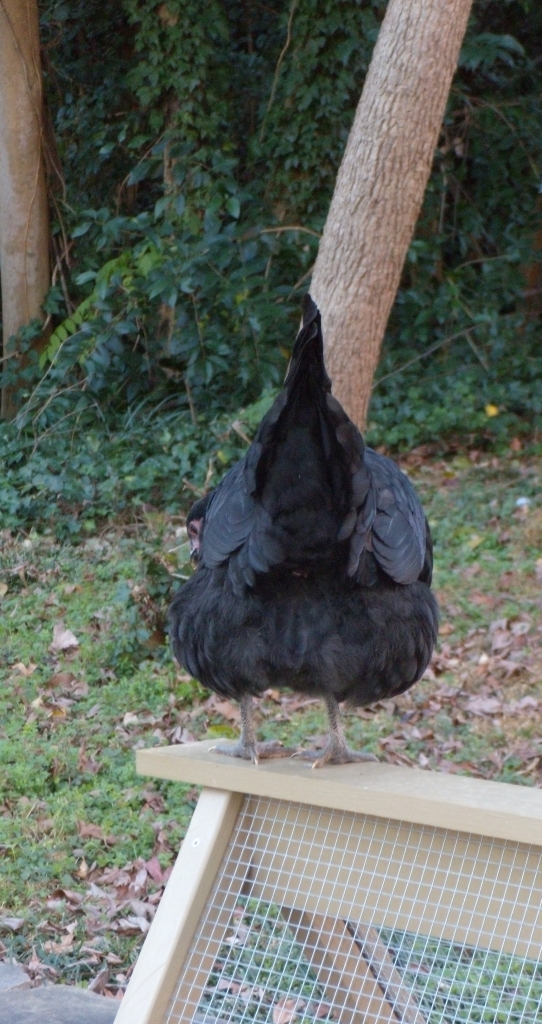 You are lucky, little geese—

traffic is light this morning,

and I am behind the wheel.

I went to a writing conference Saturday (Triangle Area Freelancers’ Write Now! conference—they did a great job). As I drove there around 8am on a state highway in an urban area, I had to brake suddenly for a family of geese padding into my lane. I quickly glanced in the rear-view mirror and was relieved there were no cars immediately behind me. To the best of my knowledge, the family made it safely across the road. Whew.

Behold the miracle of the day—

Yes, chickens like to brag on their egg-laying prowess. “See what I have made!” (That one is not ours. I think ours might even be louder. Just imagine the cacophony when they all join in to praise their sister hen.)

I hope you’re all having a nice Sunday, happy Passover, happy Easter, or whatever holiday or egg-laying event you prefer to celebrate. In our heretical household, we go for Happy Zombie Jesus Day! 😉

dangling from a chicken’s beak—

me from sick sleep—where the hell

is that snooze button?

I wrote this yesterday but forgot to post it. Spent most of the day sleeping as much as I could. Horrible chest cold… Chickens have a very distinctive alarm call—kind of like a car alarm. It usually goes for few minutes then stops, but it’s hard to ignore… 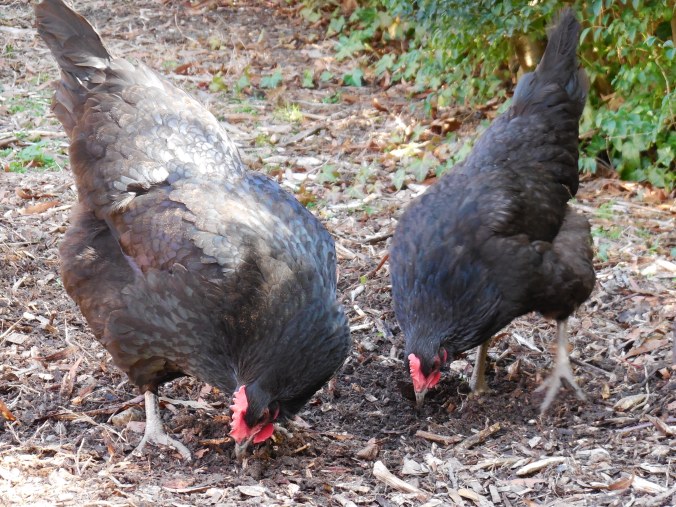 Happy April. Happy National Poetry Month 2015 (#NPM15). I figure it’s time to get serious about posting again, so we’ll shoot for a poem a day during the special month of April. But I’m warning you now—they may be mostly chicken haiku.

Incidentally despite my lack of recent posts, I still get some regular traffic. I can always tell when some high school or college Spanish class is translating poetry. Back in 2012 I posted a few translations of Gustavo Adolpho Bécquer’s Rimas. They are my MOST POPULAR POSTS EVER. (I think I’m a little insulted that my own work doesn’t get more attention. Heh.) Some days I think I should hide them and make the poor kids do their own work.

In case you’re interested (and they do make pretty good reading for #NPM15), in order of popularity…

Rima XXI – By far the most popular, currently around 1650 views.

Almost everything else of mine has well under 100 views. So, this is not a brag fest on how popular my blog is—just an interesting side note on what people are searching for that gets them here. And yes, visitors do seem to look at more than one page. They look at the other Rimas—but only if they’re part of the homework assignment!! After that, I’m pretty sure they never return. You’d think they could at least give me a Like or something…

easy to dig; maple and 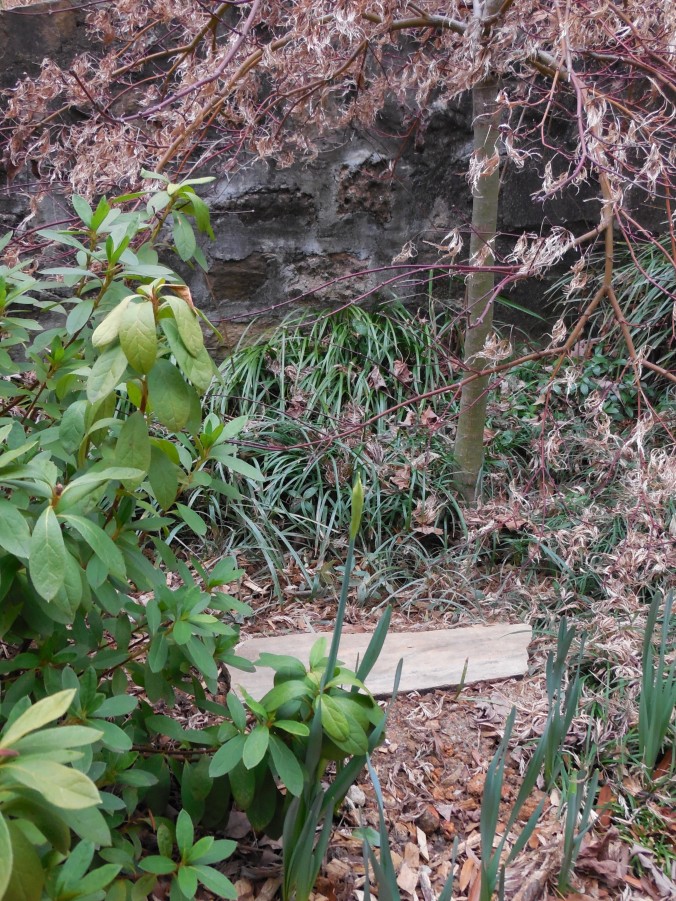 We lost our first chicken this past weekend. She’d been noticeably unwell since about Thanksgiving, but we think her condition had been going on for at least a year, when she started drinking a lot of water and laying peewee eggs. We treated her for the typical parasites and infections one finds in backyard chickens, but the other two girls had no symptoms, so we weren’t surprised that she didn’t really improve. We finally took her to the vet, who said it was something more serious, e.g., ovarian cancer, heart disease, kidney disease. We weren’t going to spend the $$ to get a full diagnosis because we knew we weren’t going to treat her beyond offering comfort.

So, for the past couple weeks she lived in the garage (actually on and off for the past couple months). She didn’t seem like she was in pain, but she couldn’t eat much and didn’t seem to be getting nutrients from what she did eat. She just got weaker and quieter. She finally died Saturday. We were glad to be home with her when it happened, and we found a nice spot to bury her in the garden.

She was our little sweetie! Goodbye, Victoria!

on the wall or on the cage—

all the world’s a stage!

Anne on the coop, Margaret on the wall, Victoria on the ground

Another in the chicken haiku series for those who supported Raleigh Review‘s scholarship fund.

Here’s another of my promised chicken haiku for those who contributed to Raleigh Review‘s scholarship fund:

Feathers in the yard

and chickens cringe from touch—

the prick of new growth. 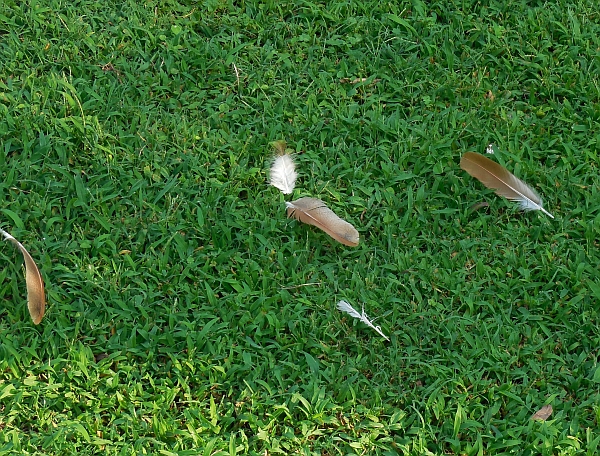 Feathers in the yard

Poor Victoria has lost all her tail feathers! She is very grumpy about that. (“Look away! I’m hideous!”) She doesn’t like to be picked up right now. Having all those new feathers coming in is a little like teething in babies—it needs to happen, but it doesn’t feel good. 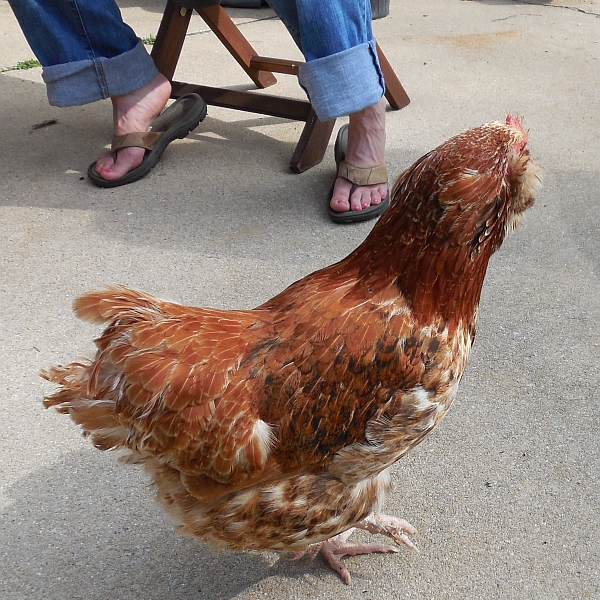 Victoria is a faverolle, which is a variety of chicken that has feathers on the feet. You can see where the new pin feathers are coming in. If they get bumped and broken, they bleed profusely.

Hang in there, Victoria! It will be over soon. (Well, in a few months, if last year is any indication…)

Got a couple of visitors near the chicken coop. Not sure if transitory or permanent. Hmmm.
The chickens are feasting on their weekend scratch!
We decided to be #frontyardchickens this morning.